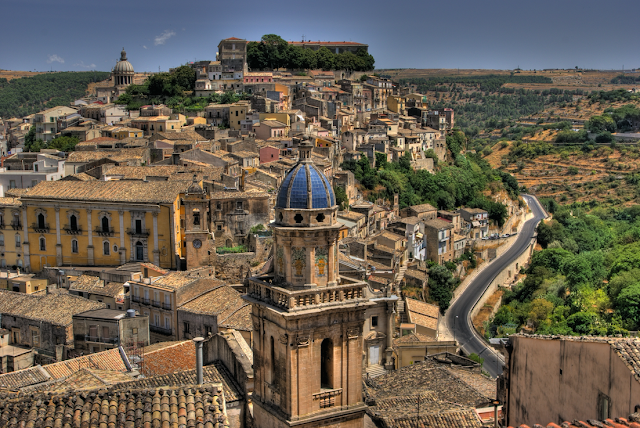 Ragusa, Sicily
In a previous Roman Candle Tours blog post, we came up with a list of “Five Northern Italian Cities You Really Should See”. The list took in the historic towns of Turin, Milan, Genoa, Bologna, and Trieste.
Now it’s the turn of the south of Italy, where many true gems are often ignored simply because it takes a little more effort to go and see them – at Roman Candle Tours, we think the effort is well worth it.
So slap on the sun cream, you’re about to head into the heart of the Mediterranean with our list of “Five Southern Italian Cities You Really Should See”. 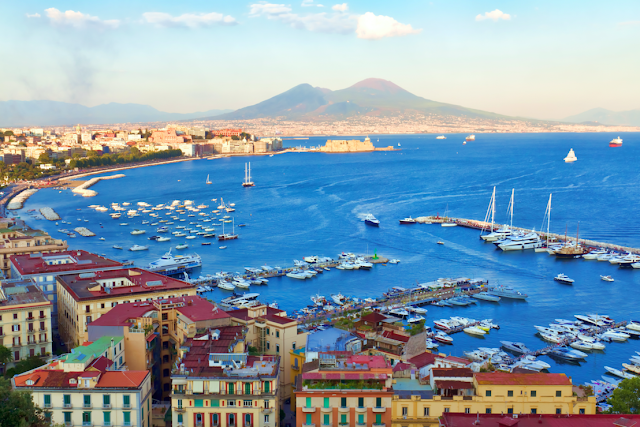 The largest city in the south of Italy was once so famed for its beauty that locals had the fatalistic saying: “See Naples and die!”. The mixed sense of allure and foreboding is hardly surprising given that Naples sits in the shadow of the fearsome Mount Vesuvius volcano (which you can climb) and took the brunt of Allied bombing during World War II. It only makes this UNESCO World Heritage Site an even more mesmerising place to visit.
The best place to hear about Naples’s absorbing history of Bronze Age settlements, Greek and Roman domination, and French and Spanish rule is in the wonderful National Archaeological Museum – among other items, the museum houses precious artefacts from nearby Pompeii and Herculaneum, as well as a Secret Cabinet with an amazing collection of ancient erotica! For the more refined tastes, the Museo di Capodimonte has a stunning painting collection including key works by Raphael, Titian, and Caravaggio. And for a glimpse into the city’s Medieval past, hit the 13th-century Castel Nuovo fortress down by the seafront.
With a major port overlooking the legendary Bay of Naples, the city continues to be one of the world’s busiest marine passenger terminals and a perfect base to tour the nearby islands of Capri, Ischia, and Procida, as well as the breath-taking Amalfi Coast. Naples is also, unsurprisingly, renowned for its seafood and boasts more Michelin stars than any other Italian city. Have simpler tastes? Don’t worry, no food is more associated with this southern jewel than the humble pizza – the fresh tomato, mozzarella, and basil masterpiece that is the Margherita pizza was even named here in honour of a 19th-century Queen of Italy. 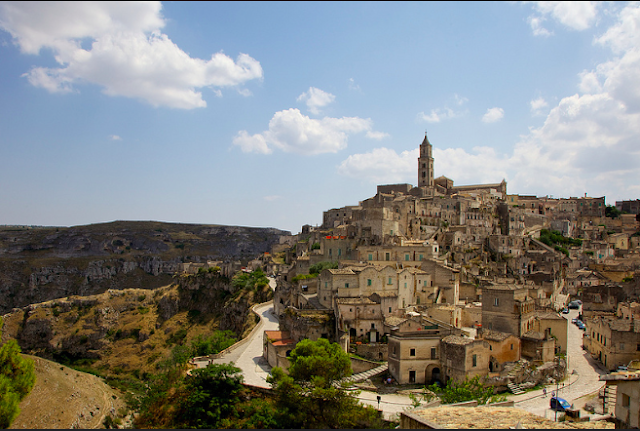 Photo credit: Francesca Cappa
Settled since Palaeolithic times and developed by the ancient Romans, the city of Matera is one of the true wonders of Italy. With a city centre literally carved into the local stones (“Sassi” in Italian), this unique hilly paradise has been a UNESCO World Heritage site since 1993.
Because of its rare beauty, the Sassi has been a favourite location of filmmakers for decades, memorably featuring in Pier Paolo Pasolini’s The Gospel According to St. Matthew and Mel Gibson’s The Passion of the Christ. The fact that both films are religious in nature is no coincidence – Matera has some extraordinary Christian architecture, including its 13th-century cathedral, built in the Apulian Romanesque style, and the churches of San Pietro Caveoso and San Pietro Barisano. Even older, the remains of some so-called Rupestrian shrines – Christian cave-like shrines built on the “rupe” (cliff edge) of the Sassi – have revealed frescoes dating back over a thousand years. The best place to hear all about Matera’s layers of history is in the town’s National Museum (Museo Nazionale Ridola).
Increased publicity for Matera in recent years and a future as European Capital of Culture in 2019 has regenerated what was once a poverty-stricken area, and led to a proliferation of hip restaurants, bars, and artisan shops. Even so, because of its isolated location, the Sassi is still visited by relatively few foreign tourists.
Our advice: Get there now before the crowds arrive! 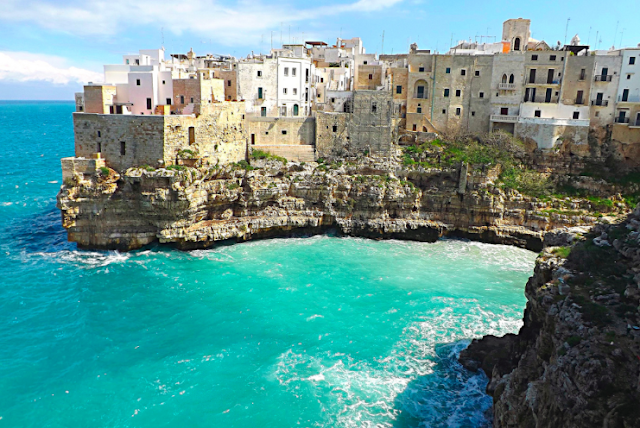 This pre-Roman city is the capital of the region of Puglia (‘Apulia’ in English) and the second-most important southern city on the Italian mainland after Naples.
Already a thriving port in ancient Roman times, Bari became one of the prize possessions of southern Italy during the Norman conquests – the magnificent 12th-century Castello Svevo, built for King Roger II of Sicily and rebuilt for Holy Roman Emperor Frederick II, is testament to that. On a visit to the Old Town, you’ll also be able to take in the gorgeous 11th-century Romanesque masterpiece that is the Basilica of Saint Nicholas – as well as containing a chapel in the crypt for pilgrims of the Orthodox faith, the basilica is said to hold the actual remains of Santa Claus! The other great Medieval church you cannot miss is the Cathedral of Saint Sabinus.
For an aperitivo or snack, there are some lovely picturesque squares in Bari, including the Piazza del Ferrarese and Piazza del Mercantile. And if it’s shopping you’re after, you’re in for a real treat – the Murat district of the city, named after a 19th-century Napoleonic architect, is one of the most impressive shopping zones in the whole of Italy, with a plethora of both artisan and high-street shops. 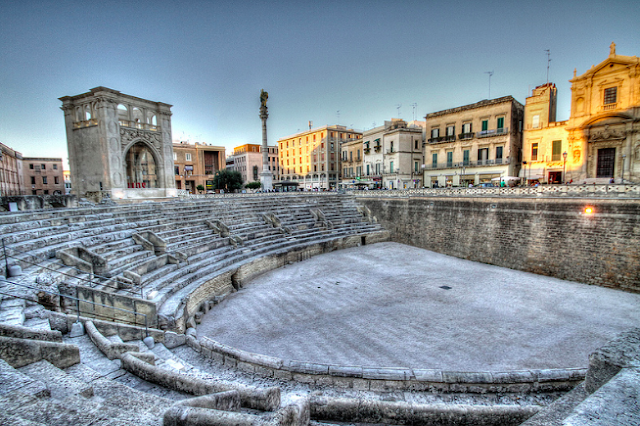 Situated on the heel of Italy, this Baroque masterpiece off the well-trodden tourist path is often referred to as the ‘Florence of the South’. Founded as a Greek settlement, the city became a prestigious town in Roman times – you can still see the ruins of the magnificent 2nd-century amphitheatre near Piazza Sant’Oronzo.
At various periods in the last two millennia Lecce fell into the hands of Goths, Saracens, Slavs, and Normans, but its defences were definitively bolstered in the 16th by the Holy Roman Emperor Charles V. Charles reinforced the town’s sumptuous Castle – once owned by the feudal Orsini family and still visitable today – and had the Triumphal Arch built.
Much of Lecce’s charm derives from the building and rebuilding work of the 1600s – of particular note, the restoration of the city’s Medieval Cathedral (Duomo) dates from this period. Building work predominantly relied on the local limestone for which the city is heralded – this stone gives Lecce’s architecture a beautifully distinctive off-white hue.
Beyond Lecce’s glorious historic centre, you’ll find some of the loveliest white sandy beaches in southern Italy – e.g. Frigole – and a rich maritime tradition that ensures delicious seafood specialities, such as Lecce’s own variation on baccalà (dried-cod). Other local culinary delights include olive oil and orecchiette (‘little ears’) pasta, perfect for absorbing vegetable-based pasta sauces. 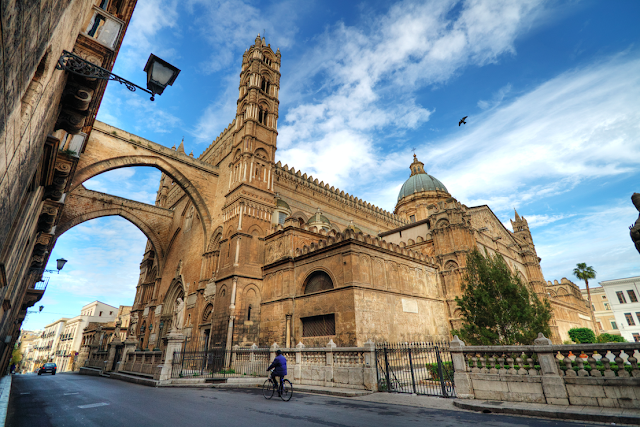 Nowhere displays the proud multicultural roots of southern Italy more than Sicily’s most famous city. Founded by the ancient Phoenicians and at various times controlled by the Carthaginians, Greeks, Romans, Byzantines, Moors, Normans, and Spanish, Palermo is an absolute treasure trove for history lovers and formally recognised by UNESCO for its majestic Arab-Norman architecture.
Among the faded decadence, you’ll be able to visit the incredible Norman Palace, originally built for the Moors in the 9th century but expanded and embellished by the Normans from the 11th century onwards – the stunning mosaics in the Palatine Chapel, commissioned by King Roger II in 1132, are of unequalled beauty. Other great structures recognised by UNESCO include the 11th-century Zisa Castle, the Church of St. John of the Hermits, and the magnificent Cathedral of the Assumption of the Virgin Mary. If you’re interested in more recent history, take a stroll down to the fascinating port district of La Kalsa, heavily bombed during World War II – here you’ll find a commemorative plaque to famous Mafia prosecutor Paolo Borsellino who, along with his heroic colleague Giovanni Falcone, was born in the area.
Despite its many creaking façades, Palermo is a hugely vibrant place. To get a sense of this, a trip to the bustling Vucciria market – memorably painted by Sicilian master Renato Guttuso – is an absolute must. Day or night, the Vucciria never really shuts down, and if you have adventurous taste buds, you’ll find all sorts of animal and fish parts to tickle your fancy – local specialities include veal spleen (“milza”/“meusa”) and pasta with squid ink (“spaghetti al nero di seppia”).
If looking to get out of town for a day, why not hire a bike and cycle the 11km to the lovely Mondello beach nestled between the hilly reserves of Monte Gallo and Monte Pellegrino.

As with our recent blog post on “Five Northern Italian Cities You Really Should See”, we haven’t been able to fit in all of our favourite towns in southern Italy here.
So if you think we’ve left somewhere out that deserves special mention, feel free to tell us about it in our comments section!

Written by: Shane Harnett
If you liked this article, read also “FIVE NORTHERN ITALIAN CITIES YOU REALLY SHOULD SEE” 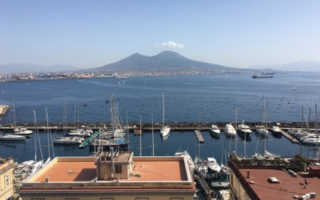 THE PERFECT WEEKEND IN NAPOLI

THE DAZZLE AND THE BELLEZZA: WHAT MILAN FASHION WEEK HOLDS FOR YOU