Foodie guide of Rome: Roman specialties for take away

Don’t worry, we created a foodie guide for you that includes places offering Roman specialties for take away, so you can try all the local dishes without sitting in restaurants for hours. 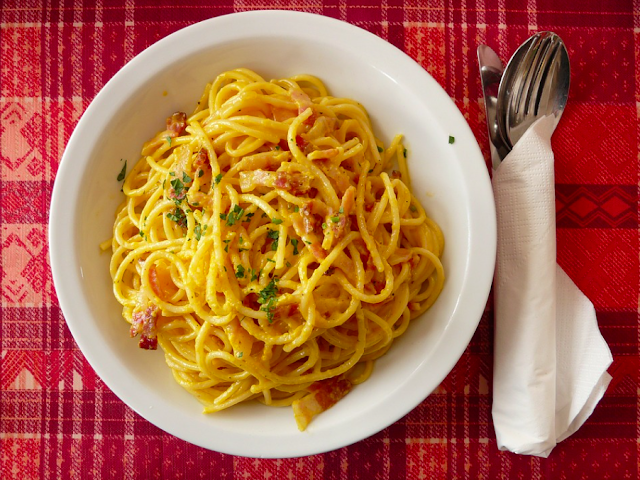 Pasta is essential part of Italians’ diet; it is eaten almost every day. A pasta a day keeps the doctor away, right? All the regions in Italy have their own special pasta dish and all the sauces have a matching pasta shape that absorbs exactly the right amount from the sugo, creating a perfect harmony of flavors and textures. The typical Roman pasta dishes are carbonara, cacao e pepe, all’Amatriciana and alla Gricia.

Carbonara is made with eggs, bacon (pancetta or guanciale), cheese (Pecorino Romano or Parmiggiano-Regiano) and black pepper, most of the time eaten with spaghetti. Attention, the original recipe doesn’t contain cream!

Cacio e Pepe is very simple: made of melted cheese (Pecorino Romano) and black pepper. Spaghetti, tonnarelli or vermicelli are the perfect match for the cheesy sugo.

All’Amatriciana originates from a town called Amatrice. It is made with bacon (guanciale), tomato sauce, pecorino cheese and black pepper and is eaten with spaghetti or bucatini. Ever since the big earthquake that destroyed Amatrice in the summer of 2016, many restaurants joined the fund-raising initiative and offer donations after each serving of the town’s famous pasta dish. So be good and eat a big plate of Amatriciana for Amatrice!

Alla Gricia is made with bacon (guanciale), pecorino cheese and pepper, eaten with rigatoni or penne.

These pasta dishes can be found on the menu of almost every restaurant in Rome. But where can you order them for take away?
In Pasta Imperiale (Via dei Coronari 160, Via del Boschetto 112) you can create your own dish by choosing the preferred pasta shape and the salsa. Of course, you can ask for help from the shop assitants who know which combinations make the perfect match. They have a very cool take away box if you opt for eating somewhere outside.

Paste e Vino Come ‘na Vorta (Vicolo del Cinque 40) has a very similar concept: you can create your favorite combination and take it with you to eat at a piazza in the authentic Trastevere neighbourhood.

In case you are around the Spanish Steps and craving pasta, go to Pastificio (Via della Croce 8), a shop selling freshly made pasta and also offering pasta dishes ready to go. You can usually choose between two alternatives and the menu might change from day by day. 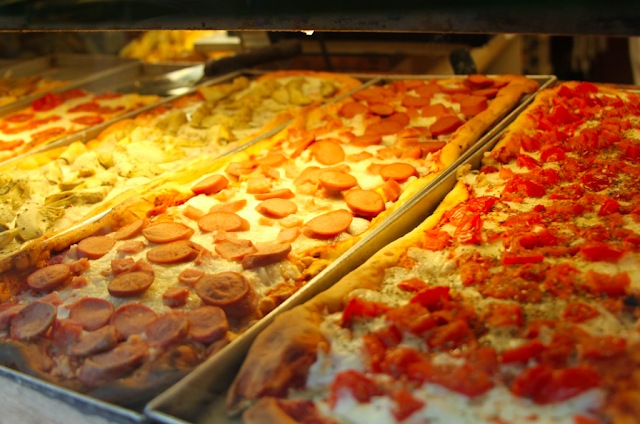 Italian pizza is world-famous but many people are surprised when they arrive to Rome and discover how pizza looks like here: it is baked and sold in square slices, called al taglio (by cut). Of course, in restaurants you will find the round, bigger-than-your-plate versions too.

But pizza al taglio is a real Roman invention and it has three main advantages compared to its round-shaped cousines: it doesn’t require fork and knife for the consumption, it can be eaten on the way and above all: you don’t have to stick to one version because all the squared slices can come with different toppings!

Traditionally, pizza al taglio is baked in big rectangular trays and then sold by weight in bakeries (forno) and pizzerias. Nowadays there are many places specialized in and famous for pizza al taglio. If you are around the Vatican City, don’t miss out eating at Bonci Pizzarium (Via della Meloria 43), considered the best place for eating pizza al taglio in Rome.

They have a stand also at Mercato Centrale at Termini (Via Giovanni Giolitti 36). Alice is a chain specialized in this mouthwatering Roman snack and has several locations (just a few examples: Via delle Grazie 7/9, Corso Vittorio Emanuele II 35, Galleria Commerciale Porta di Roma, Via degli Ammiragli 18, Corso Trieste 195).

In case you’re strolling around the charming Monti neighbourhood near the Colosseum, try Pizzeria Boccaccia (Via Leonina 73). And if you are close to Largo di Torre Argentina, don’t miss Pizza Florida (Via Florida 25), offering a great variety of delicious pizza al taglio. From there, you can even walk to the River Tiber and munch on your snack with the perfect view in the background. 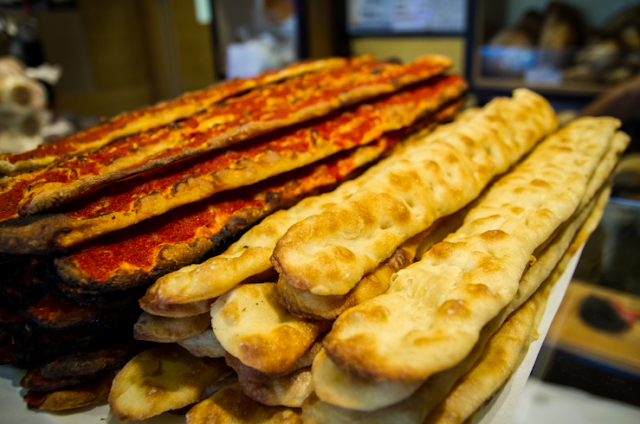 Talking about pizza, there is another truly Roman but lesser known version: the pizza bianca. It is similar to focaccia and it is so specific to the Roman region that many Italians living on the north of the country don’t even know about it.

The difference between focaccia and pizza bianca is that the latter one is softer and has an indescribable chewy yet crispy texture. Moreover, focaccia is usually seasoned with herbs such as rosemary and has different versions from region to region while pizza bianca is plain and simple: a pizza dough sprinkled with salt and brushed with high quality olive oil. It can be eaten as a bread accompanying your meal, a salty snack consumed in pieces from the paperbag on your way or can be a base for sandwiches if it is cut in half and filled with cold cuts, cheese and vegetables.

The most famous version is filled with thin slices of mortadella, called pizza bianca e mortezza. The „summer edition“ comes with prosciutto and figs, and is only available during the warmest months when figs are in season.

Pizza bianca can be bought in bakeries where it is sold by weight and you have to indicate the amount you want either agreeing or disagreeing with the shop assistant who is moving the knife above the pizza to cut a piece for you.

Another simple delicacy that can be eaten on the go is pizza rossa which is made from the same dough as the white one but it’s brushed with tomato sauce. It is baked in very long rectangular pieces and when you order at the counter, just nod your head to indicate the shop assistant where to cut it.

The best pizza bianca and pizza rossa can be bought at Antico Forno Roscioli (Via dei Chiavari, 34) and at the Forno at Campo de’ Fiori (Vicolo del Gallo 14). The latter one has two shops, one of them selling bakery products (red pizza can be bought here) and the other one – just across the street – selling sandwiches made with pizza bianca.

Supplì are the perfect Roman street food: small but very filling fried risotto balls covered in breadcrumbs, stuffed with cheese or meat ragù or sometimes both. The name comes from the French word “surprise” and it refers to the feeling you get when you open up the warm risotto ball and discover the melted, soft cheese inside.

Also, they are often called “supplì al telefono” because after opening, the warm cheese becomes long and stringy and it looks exactly like the cord connecting a telephone to the hook (obviously, a not-so-relevant name in the smartphone era). Supplì are similar to the Sicilian arancini, the difference is that arancini are usually bigger and instead of cheese they are filled with meat ragù., peas, eggplants or even with spinach and salmon. Moreover, you can recognize supplì by its oblong shape while arancini are round or drop-shaped snacks.

Supplì can be found at many restaurants as appetizers and there are also places specialized in making this Roman snack and selling it ready to go, such as Supplizio* (Via dei Banchi Vecchi 143), Il Suppli*(Via di S. Francesco a Ripa 137) and Re di Roma Pizza – La Casa del Suppli (Piazza dei Re di Roma, 20). 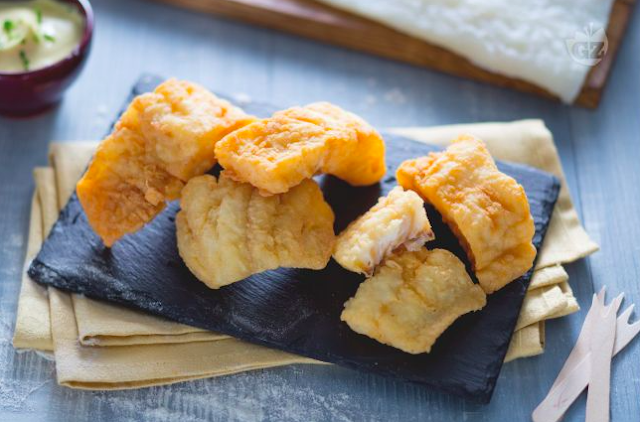 Talking about fried food, another truly Roman specialty is filetti di baccallà which are battered and fried cod fillets. It can be ordered also as a starter in pizzerias but most of the time it is eaten on the go, covered in paperbag. It is the perfect street food: crispy, oily, easy to eat with your hands and gives you enough energy until the next foodie stop.

The most famous place that specializes in filetti di baccallà is Dar Filettaro (Largo dei Librari, 88). 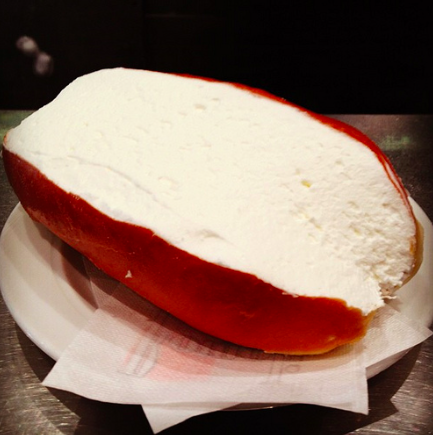 After all the savory food, you are surely about to ask: is there something for the sweet tooth? Even though gelato perfectly fits into the grab-n-go category, there are other sweet snacks that are worth a try.

Maritozzo is a sweet brioche filled with whipped cream, an ideal choice for breakfast or for merenda (afternoon snack). Romans often take some of the filling and mix it into their coffee to make it creamier. Even though maritozzo is known as a typical Roman pastry, not many places sell really good ones because it is hard to find the balance with the creamy filling.

Its name derives from the Italian word “marito” (husband) and related to a romantic tradition, namely that a girl’s fiancé was giving his future bride a maritozzo on the first Friday of March, which was the day of lovers, similar to Valentine’s Day. Often the ring or a piece of jewellery was hidden in the whipped cream. And okay, there is a less romantic theory about the origins of the name, explaining how the form and the white cream of maritozzo resembles a certain body part of the marito…This is more like a Giovanni Boccaccio kind of explanation. 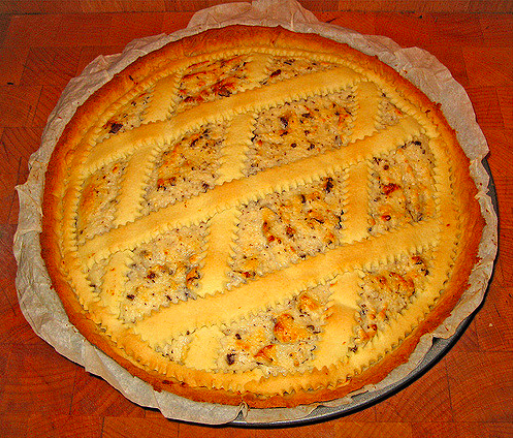 Another typical sweet snack from the Eternal City is crostata di ricotta, the “Roman cheesecake” which has been consumed for centuries and considered as one of the oldest Italian desserts. It is a tart with sweet ricotta cheese and a dash of cinnamon, often made with sour cherries or chocolate chips mixed into the creamy filling.

As this dessert has Jewish-Etrusk roots, the most famous pastry shop selling amazing crostata di ricotta can be found in the Jewish quarter of Rome. Pasticceria Boccione (Via del Portico d’Ottavia 1) 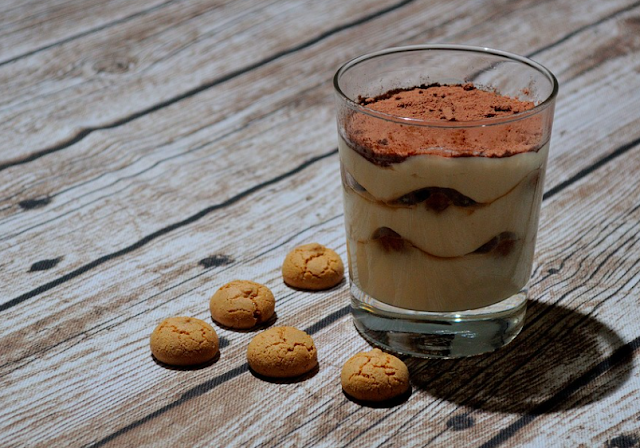 Although it originates from Veneto region, tiramisù is wide-spread all over Italy and gained popularity worldwide. Tiramisù means pull-me-up and it refers to the effect of caffeine and sugar that pumps you up after eating this fluffy dessert. The original version is made of layers of ladyfingers soaked in espresso, a sweet, creamy mixture of mascarpone, sugar and eggs and it is topped with unsweetened cocoa powder.

Sometimes Marsala wine or liquor is added to make it more ‘bittersweet’. It’s very easy to prepare at home and they say that the best tiramisù is made by your nonna (grandmother). Fortunately, Rome has a few pastry shops that offer this fluffy, creamy dessert for take away so that you can indulge in it while sitting outside in the sunshine.
If you are around the Spanish Steps or the Vatican City, don’t miss Pompi (Via della Croce 82, Via Cola di Rienzo 313) that sells tiramisù in a take-away box and besides the original version, they have flavors such as strawberry, banana & chocolate, pistachio, hazelnut and even pina colada during the summer.
Another tiramisù-to-go place is located close to Campo de’ Fiori and it is called ZUM which is the abbreviation of zucchero (sugar), uovo (egg) and mascarpone, the main ingredients of the famous dessert. They have classical and seasonal flavors, as well as lactosefree, glutenfree and light versions for the special dietary needs. (Piazza Del Teatro Di Pompeo 20)

Written by: Jokkel Dora
If you liked this article, read also “THE BEST VEGAN PLACES IN ROME” 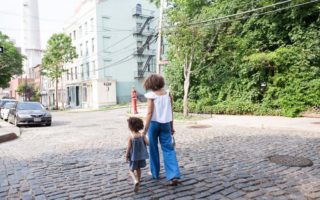 THE PERFECT MOTHER-DAUGHTER (OR SON) TRIP TO ROME