Italy is renowned for many things. It boasts an immense cultural patrimony (with more UNESCO world heritage sites than any other country), an enviable array of artworks and, of course, a universally adored cuisine. But it’s not so famous for its beaches—with stereotypes of officiously arranged sunbeds sprawling every inch of overcrowded beaches all too often proving true. And this reputation might go some way in explaining why, when it comes to beach holidays, Italy consistently comes runner up to Greece to its east and Spain to its west.
When we think of Southern Italy (or the “Mezzogiorno”, as it’s know), we often think about the cities, like Naples and Matera, or the towns and villages, like Positano and Sorrento. We also conjure up images of the coastline—particularly the inimitable Amalfi Coast—though more about the gems that line it rather than the waters that lap it. And, of course, we picture the islands: not just the big beasts like Sicily, Sardinia and Corsica, but also the lesser-known if no less breathtakingly beautiful island retreats like the Tremiti or Aeolian Islands.
But for those seeking a week or two in the sun the South does have plenty to offer. And whether it’s for a flopout holiday based in one place or a trip spent traveling the coastline, the regions of Puglia (at the country’s heel) and Calabria (at its toe) offer a wealth of opportunity. Calabria easily has some of the country’s best coastline. The South Tyrrhenian can claim what locals call “La Costa degli Dei” (the Coast of the Gods) and “La Costa Bella”(the Beautiful Coast) among its most famous.
Puglia’s waterfronts also seem blessed by the gods, at least in appearance if not in name. And while in the north, waters around the regional capital of Bari might not illustrate the best example of what the region has to offer, the further south you go the more the region starts to resemble Greece—especially around the Salentino peninsula with its whitewashed buildings and immaculate coastline. So which are the best spots in Puglia and Calabria for some sun and swim? Here at Roman Candle Tours we’ve prepared this list to guide you through some of the best beaches the South has to offer! 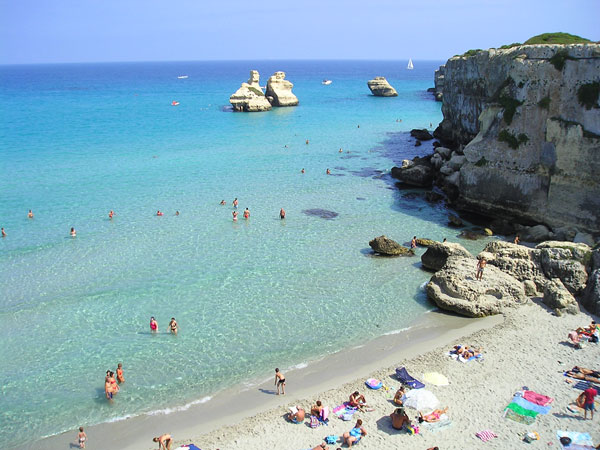 Photocredits: Pinterest
Named after the sixteenth-century tower that stands in ruins above the coast, Torre dell’Orso is easily among Puglia’s most beautiful beaches. The golden bay stretches on for almost a kilometer, lapped by crystal-clear turquoise waters and flanked by rolling sand dunes and pine forests. It’s accessible only by car. But the coastal drive along the Adriatic is a treat in and of itself.
It’s mainly locals who line the beach; families and young people who have driven down from Lecce or up from Otranto. And although most spend their time sunbathing or playing in the water, others can be found exploring some of the areas natural curiosities—especially the area’s numerous sea caves, rich in pre- and ancient history. The main stars of the show at Torre dell’Orso, though, are the pair of rocks (pictured above) known as “Le Due Sorelle”—the Two Sisters.
Legend has it that these two sisters fled to the coast in order to escape the monotony of their daily lives (like all modern beachgoers, come to think of it). Having plunged into the waters, though, the sisters found that they were unable to return to the shore (again, looking at this beach that really doesn’t sound too bad…) But the gods took pity on their plight and—in what they presumably considered to be an act of mercy—turned them into stone so they could remain in the waters forever. 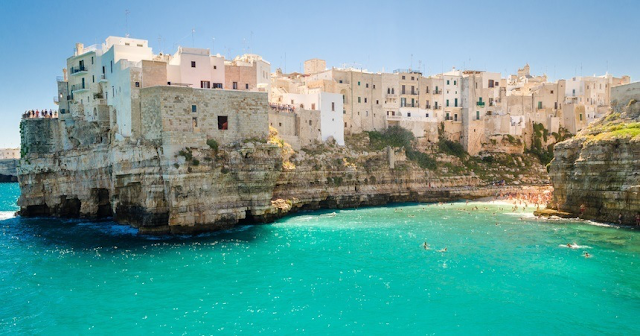 Photocredits: Homeaway.com
A cliff-top town with just one small beach might seem a strange choice for this list, given the number of picturesque beaches lining the Puglian coast. But with Polignano al Mare’s quintessentially southern character, its dramatic views across the Adriatic and its authentic yet accommodating atmosphere, it easily earns its place.
The smooth pebble beach is rather small, tightly tucked between two sheer imposing rocks and accessible only via a flight of stairs. But its waters are crystal clear, making it popular amongst both snorkelers and local kids and teenagers, who entertain themselves competitively diving from the rocks into the sea below until gone sunset.
Being a fully inhabited and fully functioning town—at least as far as towns in the south go—Polignano al Mare has much more to offer than just its beach. Spending a few hours out of the sun, losing yourself in its narrow labyrinthine streets is immensely rewarding. And once you’ve worked up enough of an appetite, you can dine in style at the internationally famous Grotta Palazzese: a hotel-cum-restaurant built into the side of a cliff. 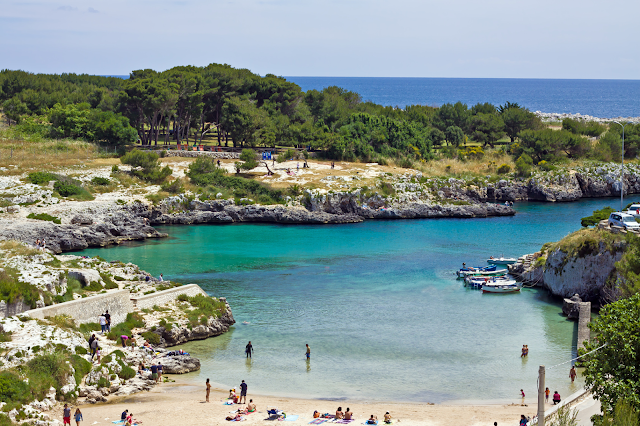 The beach at Porto Badisco may be the smallest on this list, but what it lacks in size it more than makes up for in character. Located around eight kilometers south of Otranto, Porto Badisco has a remarkable history: In his epic the Aeneid, the Latin poet Virgil wrote that Apulia’s Porto Badisco was the landing place of Aeneas (the mythical founder of Rome) after his flight from Troy. And stretching back even further, the beach is home to the “Grotta dei Cervi” (the Cave of the Deer), with rupestral paintings dating back 4,000 years to the Neolithic period.

Porto Badisco’s not really a family beach. Accessible only via a short flight of stonecut steps, the small stretch of golden sand that makes up the beach could more readily be described as a cove or a bay than a beach per se. But its aquamarine yet transparent waters are unparalleled, making it a magnet for snorkelers and divers.

Practically on the beach is the restaurant “L’Approdo di Enea” (Aeneas’s Landing) which serves up classic no-frills Puglian land and seafood. That said, if you want a little more variation just to the north is Otranto—a city whose summer scene has become increasingly vibrant in recent years with an influx of young Italian holidaymakers. 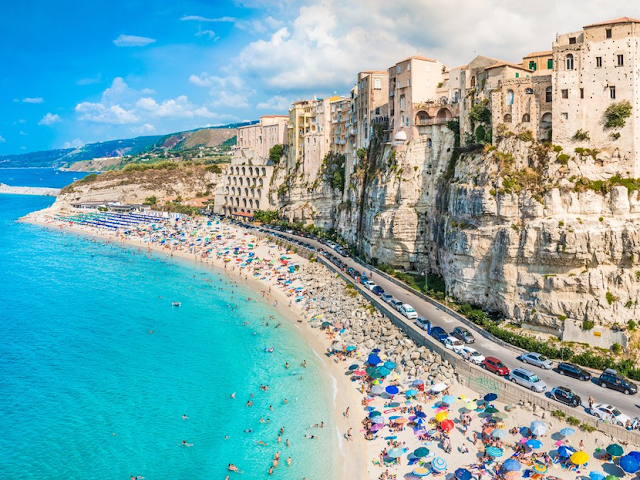 The area around coastal town of Tropea—affectionately known as the “Positano of the South”—is home to scores of stunning beaches. But with its vast stretch of white sands falling away into crystal clear azure waters, Marasusa Beach (just below the town) is surely the jewel in Tropea’s crown. Its view out over the Tyrrhenian is remarkable, but the panoramic behind the beach is no less breathtaking.

Towering above Marasusa Beach is Tropea itself, built upon a cliff of miocenic sandstone and referred to by locals as either “La Rupe” (the cliff) or “Il Scoglio ”(the rock). During the summer Tropea has perhaps the most chill passeggiata in Italy. But it’s unclear whether that’s because of the climate or because the locals are so stuffed on gelato from Gelati Tonino. Onion and cuttlefish is one of the more exotic flavors at this cornerstone establishment, though we won’t judge you for going for something a little more… traditional.

Tropea’s charm isn’t lost on its locals, and as word continues to spread the town is becoming ever more popular, and ever more crowded. But that shouldn’t put you off. Tourism brings many benefits to the area: not only in terms of quality places to eat and accommodation but also in the range of water sports, boat tours and diving activities on offer. 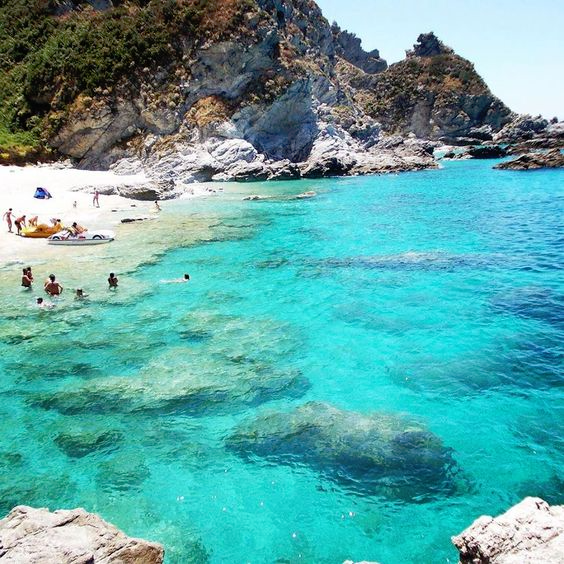 Just over ten kilometers southwest of Tropea is Capo Vaticano. It’s a wild, rugged stretch of coastline. Sheer, jagged cliffs fall dramatically away into the turquoise waters below. And it’s also an area of international geological interest; the cape itself composed of a unique white-gray granite.

Capo Vaticano isn’t the easiest place to get to. It’s not particularly well signposted, being situated on the Wild West of the Calabrian coastline. But if you’ve got a car—which is absolutely essential if you’re going to be traveling the area—it definitely deserves a day trip. Pristine white sands and Bahamas-blue waters characterize all of the beaches along this promontory. And just as rewarding as the warm waters below are the panoramas above, with some vantage points reaching heights of 124 meters.

The cape’s beaches aren’t easily accessible. To get to some, you have to descend dusty narrow paths; to get to others, you have to wade through the shallows. And the beaches also vary in terms of size and service. One of the most popular is “La Spiaggia di Grotticelle”, partly because it wouldn’t look out of place in the Caribbean and partly because of what its beachgoers have at their disposal: sunbeds, umbrellas, a bar and restaurant, and pedalos and canoes for hire. 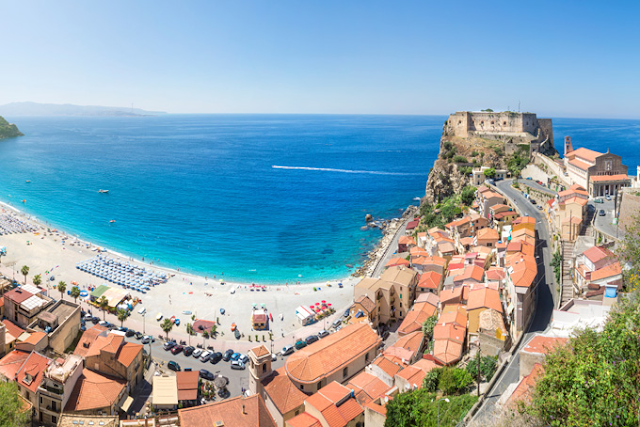 With its rich historical and mythological tradition, the hilltop town of Scilla is Calabria’s answer to Puglia’s Porto Badisco. It features in Homer’s Odyssey as the site where the gruesome monster Scylla claimed the lives of six of Odysseus’s crew. And while obviously no traces remain of this ancient myth, the remnants of relatively more recent history stand looming over the town in the form of its eleventh century castle.

The town’s pastel house lined beachfront has something for everyone. Being a shingle beach its pristine waters are exceptionally clear. And during the summer months, locals and tourists pass their time swimming, sun worshipping or snacking at one of the many quality restaurants or trattorie dotted around the town and beachfront.

Out to sea the waters are teeming with small fishing boats that stock Scilla’s restaurants with the culinary specialty the town is most proud of—swordfish. And for those wanting to go yet (and for that matter deeper) out, Scilla Diving Center offers a wide selection of expeditions ranging from rusting shipwrecks to enchanting reefs.

Both of the regions at the heel and the toe of the country are steeped in stunning beaches. And although Puglia digs into the Adriatic while Calabria dips its toe into Tyrrhenian, there’s little to separate them in terms of the quality, color and cleanliness of their waters.

Ultimately, Calabria probably has the more beautiful beaches. But unfortunately—at least for now—it also lacks the infrastructure of its northern neighbor. Calabrian tourism can be pretty hit and miss. Sure it offers rustic charm and authenticity. But such authenticity comes at a price, and knowing some basic survival Italian is far more likely to come in handy here than in Puglia. And while its coastline may for the most part be unspoiled—save the sprawling container port of Gioia Tauro—the same cannot be said for its interior.

Puglia, on the other hand, is far better adapted to cater for tourists. And, away from the beaches, it boasts more things to see. There’s Alberobello, with its iconic trulli houses; Brindisi, a lively urban hub, foremost amongst the country’s harbors for over 2,000 years; and there’s one of the region’s (and for that matter the country’s) southernmost towns, Otranto—a modern haven for those seeking the southern summer nightlife.


When to visit Calabria and Puglia

The last thing to bear in mind is the season in which to come. Summer, of course, is the best time, but you’d do well to avoid traveling at the height of August. It’s as this time that entire urban populations flock en masse “al mare” (to the sea), leaving cities across the country empty and pushing up prices along the coast.

June, July and September are the best months to come. And even then, don’t expect to have the beach to yourself. But then why would you want that! After all, what really makes an Italian beach holiday is spending it among the locals; doing what they do, eating where they eat, and—of course—overhearing an elderly Tuscan couple loudly discussing the secret to a perfect ragù sauce. In considerable detail, and for almost two hours.