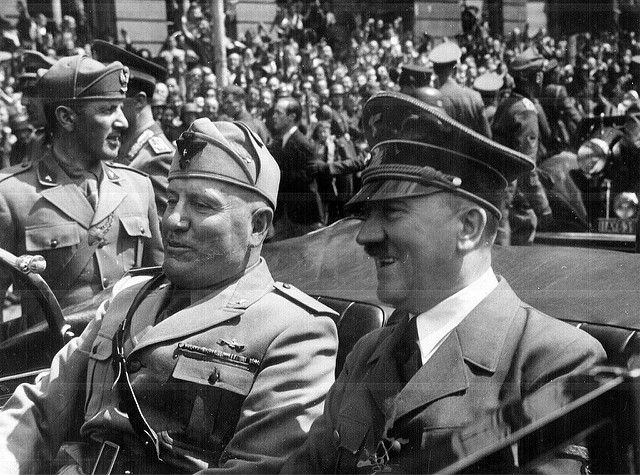 From ancient times and medieval era to Renaissance and Baroque, citizens of Rome are proud of their rich heritage and glorious past days that light from every corner of the city.
Although Italians talk about their recent history with less pride, fascism remains to be a big part of Roman life due to the massive and impressive architectural sites throughout the city.

First of all, what is fascism? A definition of the fascist regime would be: “Fascism is a form of radical authoritarian nationalism that came to prominence in early 20th-century Europe. Influenced by national syndicalism, fascism originated in Italy during World War I, in opposition to liberalism, Marxism, and anarchism. Fascism is usually placed on the far-right within the traditional left–right spectrum.” (source: Wikipedia)

Benito Mussolini in the twenties and thirties of the last century built numerous streets, buildings and entire districts that served the purpose of promotion of the fascist regime, resembling the architectural style of ancient Rome. Although still a part of the city’s fabric, many of these monuments are not signposted. So, let’s reveal some of them and make you even more curious about visiting the many fascinating sites in the Eternal City! 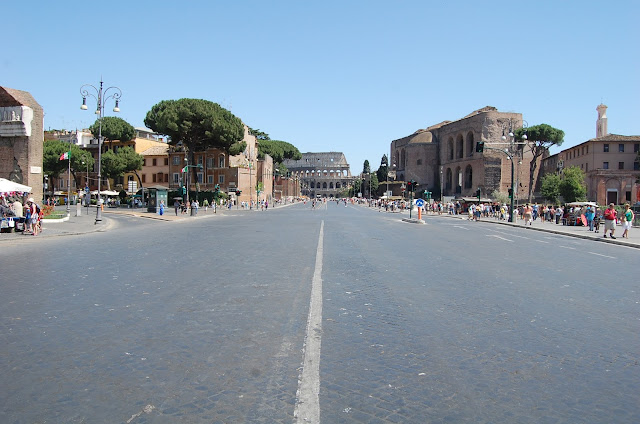 Photo credits: Altremedianews.com
If you, as most visitors to Rome, are drawn to see the Colosseum and the Roman Forum, take a walk along the wide and long Via dei Fori Imperiali from Colosseum to reach grandiose Piazza Venezia. Along the way you will see many impressive ancient ruins and a spectacular view of the Vittorio Emanuelle II monument. The price for construction of the street as it looks now was paid by many forced evictions and inappropriate excavations that have damaged a lot of historical sites during the 1920s.
The boulevard was part of the dictator’s campaign to visually and symbolically link the glory of imperial Rome with his own idea on the new fascist empire. Mussolini has used it for flashy military parades which were going the same way I suggest you to go – from the Colosseum, past the Roman and Imperial Forum to Piazza Venezia, where Mussolini was giving his crowd-rousing speeches from his office in Palazzo Venezia. The Sala del Mappamondo of the Palazzo, where the dictator had his office, can be visited only during special exhibitions. 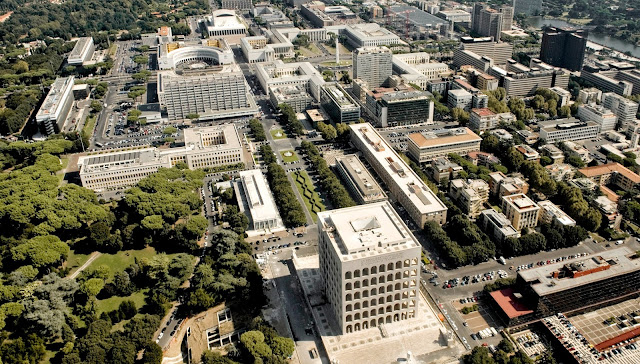 Photo credits: Memeteo.org
Some eight kilometers south of the city center, Rome’s EUR (Esposizione Universale di Roma – Universal Exposition of Rome) district is the huge urban project created by Mussolini who wanted to display the area at the 1942 World’s Fair to celebrate 20 years of fascism in Italy. Nonetheless, with the beginning of World War II the World’s Fair was discarded and therefore Mussolini’s ambitious EUR project was left unfinished but it is one of the most surreal sights in modern Rome.
Now mostly a business district, EUR is home to several less visited museums worth seeing: Museum of Roman Civilization (Museo della Civilta Romana) which will lead you to discover some secrets of ancient Rome, Museum of Post and Communications (Museo Storico delle Poste e delle Tellecommunicazioni) which hosts a precious collection of Italian postal history, Luigi Pirolini National Museum of Prehistory and Ethnography (Museo Nazionale Preistorico Etnografico) which will reveal ancient times, and National Museum of Popular Arts and Traditions (Museo Nazionale delle Arti e Tradizioni Popolari) which will show you the costumes, objects and musical instruments used in Italy between 16th and 20th century.
Square Colosseum 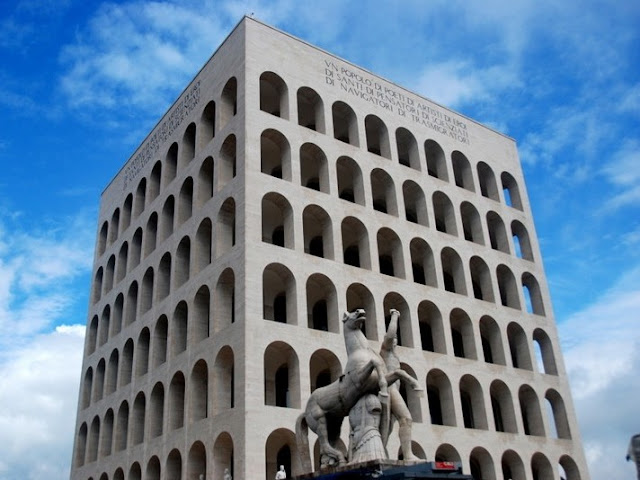 Photo credits: Artribune.com
To visit the museums and see the EUR’s large, symmetrical streets as examples of neo-classical architecture from the fascist era, take Metro B to the metro station “EUR Magliana”. The first white tall building you will see in front of you when you get out of the station is the so called Square Colosseum (Colosseo Quadrato) or more properly known as Palazzo della Civilta del Lavoro. You quickly understand why it has the nickname Square Colosseum when you see row after row of white arches made of the same travertine marble as the Colosseum.
This cube-like homage to the Colosseum is one of the symbols of fascist architecture and the spectacle of Mussolini’s propaganda. It was recently taken by the Italian fur company Fendi to serve as their administrative headquarters in Rome, but visitors can come in and see the building’s ground floor, where sometimes exhibitions showcasing the past of Rome take place.
Foro Italico 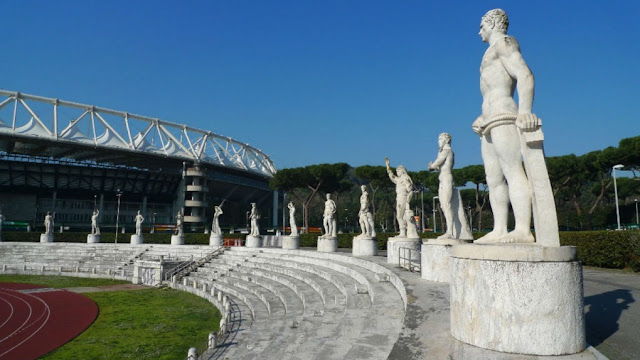 On the West side of Tiber River  visit the Foro Italico, Rome’s impressive, fascist-era sports centre that is home to Stadio dei Marmi, a running track and field arena which is surrounded by 60 marble statues.
Formerly called “Foro Mussolini”, this sports facility was built as an attempt of the fascist government to portray Mussolini as a “modern day Cesar“. A must-see is the word “DVCE” (duke) which appears in the mosaics, while the huge 36 meter tall obelisk that marks the entrance to the Foro Italico still bears its original inscription “MVSSOLINI”. To get there – take tram 2 from Flaminio or buses 32 from Piazza Risorgimento, 271 from the Colosseum or 280 from Castel Sant Angelo.
The Flaminio Bridge 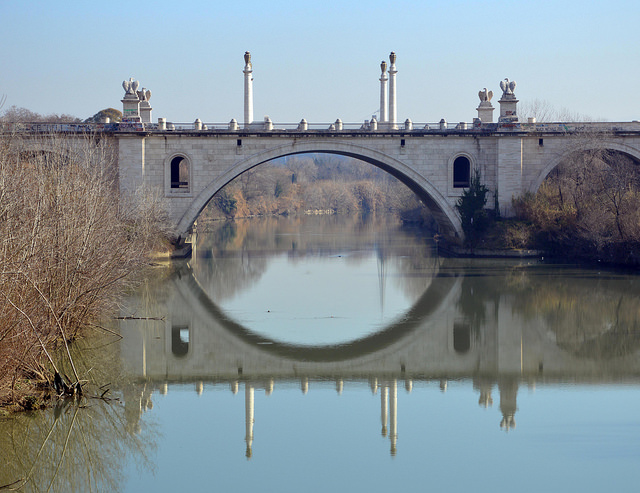 Photo credits: Giorgio Rodano
Ponte Flaminio or the Flaminio Bridge, a 255 meters long bridge which connects the area with the city centre is another impressive fascist monument designed by architect Armando Brasini in 1923. Its construction was suspended during World War II and finally finished in early 50s of the last century. 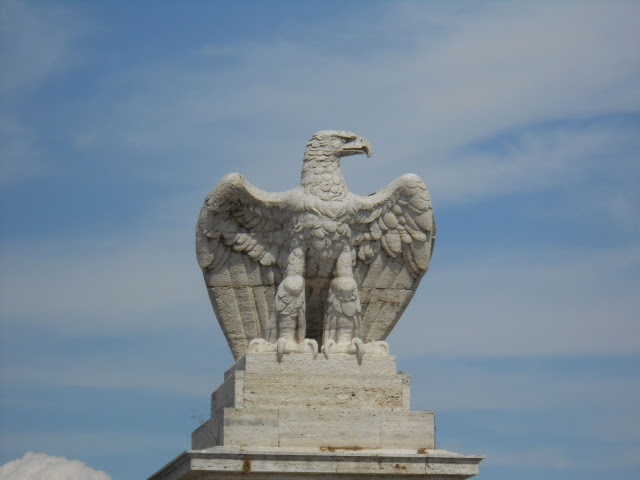 Photo credits: Roman Scribbler
When you think of Rome, the first things that may come to mind are popes, emperors and young Romulus and Remus suckling the she wolf.  However, as you can now see there is much more to Rome, a dark and complex past that people may not be so keen to remember. A big part of the city holds the imprint not just of emperors and popes, but of fascism as well. Of course, a visit to the Eternal City must include the things that it is most famous for, however apart from the usual to-see places, a visit to some of the lesser know parts of Rome will give you a better view into how it developed and its current state today. Make the most of your time in Rome and there is no doubt that it will be a once in a life time experience!
Written by: Lidija Pisker


If you liked this article, read also “TOP 5 ALTERNATIVE PLACES TO SEE IN ROME“ 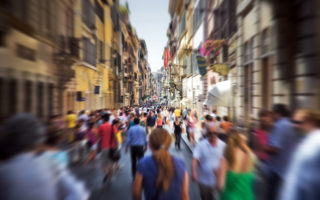 ACTIVITIES IN ROME FOR FREQUENT VISITORS (AKA ALMOST LOCALS)