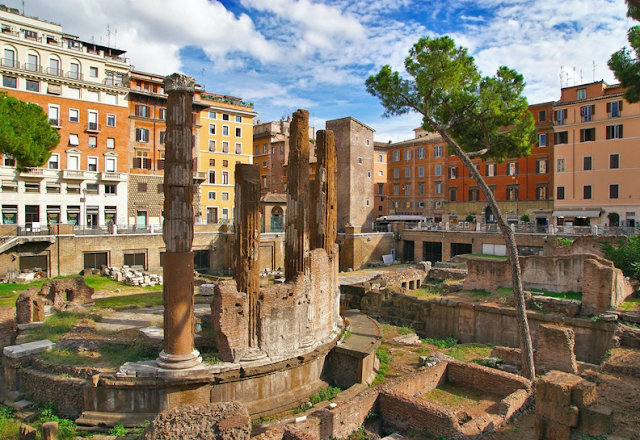 Of all the numbers associated with the amazing city of Rome, perhaps none is more representative than the number seven: Rome is built on seven hills; it originally had seven kings; and, for hundreds of years, Christians have been coming to visit the city’s seven great pilgrimage churches. With that in mind, we thought it might be fun to use the number seven to enlighten you on aspects of Roman history that may have passed you by. Prepare to be informed, shocked, dazzled, and entertained. 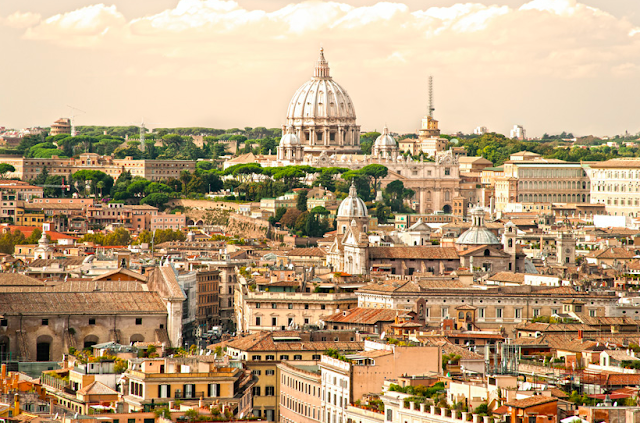 Most people know that Rome is the capital of Italy, but they are less aware that two other capitals were chosen before it. The reason for this is pretty simple – when the Italian State was formed in 1861, Rome wasn’t even in it. The Eternal City was still part of the pope’s sovereign territory (the Papal States), which covered much of central Italy. Thus, the new ruling monarchs, the Savoy family, originally chose their home city of Turin as the capital. In 1865, however, with Turin vulnerable to French control and the new Italian government anxious to acquire the Papal States, the capital moved south to Florence; it remained there until 1871, when Rome (annexed a year earlier) became Italy’s third and definitive capital.
The pope of the time, Pius IX, considered the annexation of Rome illegal and tried to bolster his own authority by excommunicating Italian nationalists and declaring himself infallible when speaking on matters of doctrine. It was a nice stalling tactic to a holy mess but ultimately doomed to fail – after a near 60-year standoff, the Catholic Church formally recognized the new Italian State in 1929, when the Lateran Treaty was signed and the Vatican State was formed.
2. The Papal Pornocracy 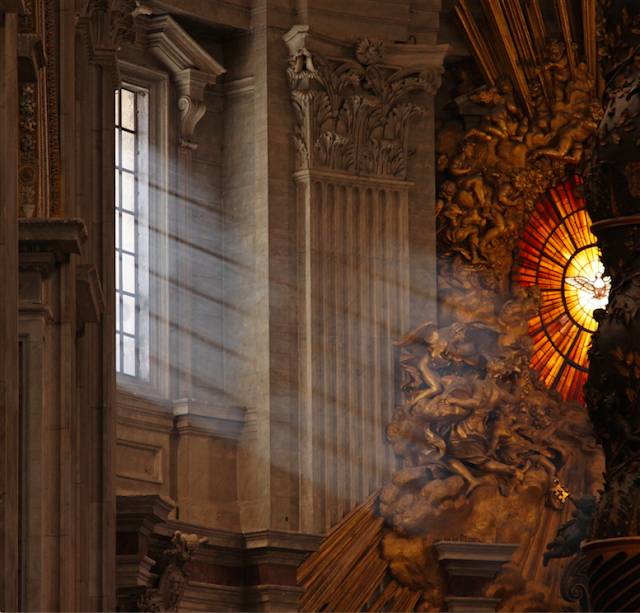 In Catholic Church history, the 10th century is usually referred to as the Dark Ages, though some historians previously referred to it as ‘The Papal Pornocracy’.
It all started out as a bloody power struggle, with no fewer than eight different popes and one anti-pope between 896 and 904, when stability was temporarily restored with the election of Pope Sergius III. Sergius, who lasted a whopping seven years, quickly became besotted with Theodora (the alluring wife of Theophylact, Count of Tusculum) and with Theodora’s beautiful teenage daughter Marozia – Sergius’s dalliance with Marozia would result in the birth of the future Pope John XI. Subsequently, Theodora, Marozia, and Marozia’s sister (also Theodora) became so influential in the court of Theophylact that they helped to arrange several papal elections, with Marozia eventually spawning a whole bloodline that included six popes.
Formidable women exercising such authority over the papacy was unprecedented and ultimately remembered with abhorrence – church misogyny later saw the ladies referred to as ‘harlots’ and ‘whores’. Little wonder then that historians once called the period the “Papal Pornocracy” or the “Age of the Harlots”.
3. The wonders of urine 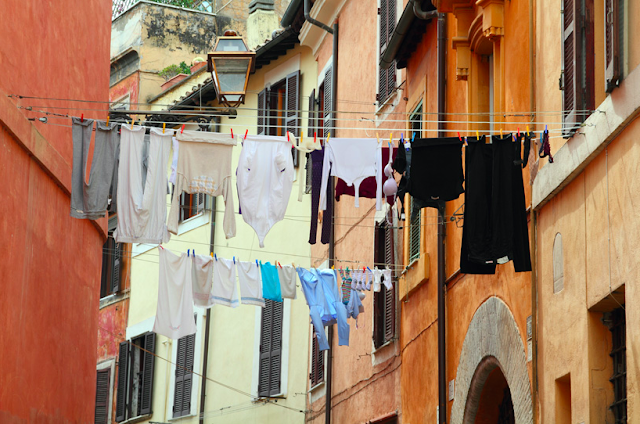 When it came to this one bodily fluid, ancient Romans and their subjects had several uses. Most famously, the Romans collected pee from public baths and toilets and used it as a detergent in their laundry facilities (fullonicae). Allowing the urine to rest for a while and then adding water, it would break down into an ammonia-based solution, perfect (though stinky) for cleaning fabrics.
Seeing the commercial value of urine, the emperor Vespasian (famous for building the Colosseum) cleverly decided to put a tax on it, something his son, Titus, was quite sniffy about. When the tax was eventually collected, however, Vespasian got Titus to smell one of the resulting coins. Titus said that the coin didn’t smell of anything, leading Vespasian to utter the famous words “Pecunia non olet” (“Money doesn’t stink”) – it doesn’t matter where it comes from, money is money.
Less appetisingly, some members of the Roman empire also used urine to clean their teeth. The poet Catullus exhorted his enemy Egnatius to stop showing off his lovely teeth, particularly as Egnatius was Celtiberian (Spanish) and everyone knew that Spaniards only had such white teeth because of all the piss they drank! 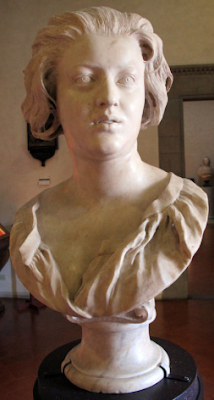 While most people have heard of Baroque master Gian Lorenzo Bernini, not everyone knows the story of his one-time muse, Costanza Bonarelli, wife of Bernini’s assistant Matteo. While Bernini was giving Matteo lots of work, he himself would sneak off to work on Matteo’s beautiful wife – he was so smitten with Costanza he even carved an incredible bust of her that you can now admire in the Bargello museum in Florence.
In 1638, however, things went awry. A suspicious Bernini decided to wait outside the Bonarelli house, from where a familiar figure soon emerged kissing Costanza goodbye – it was his dishevelled-looking brother, Luigi! Thrown into a jealous rage, Bernini chased Luigi all the way to St. Peter’s Basilica, where he clobbered him with a crowbar, breaking a couple of his ribs. Intent on murder, Bernini then continued to pursue his brother towards their home on the other side of town. Luigi eventually gained refuge inside the Basilica of St. Mary Major, before absconding to Bologna until passions died down.
Costanza was not so lucky – Bernini sent his servant around to her house to slash her beautiful face, an act of vicious thuggery that earned him a 3,000 scudi fine, which he was then absolved from paying by Pope Urban VIII. The disfigured Costanza, meanwhile, was sent for a time to an institution for wayward women, before taking up again with Matteo – despite everything, Bonarelli stayed with his wife and continued to work for Bernini right until his death in 1654.
5. From liberating Rome to directing Roman Holiday 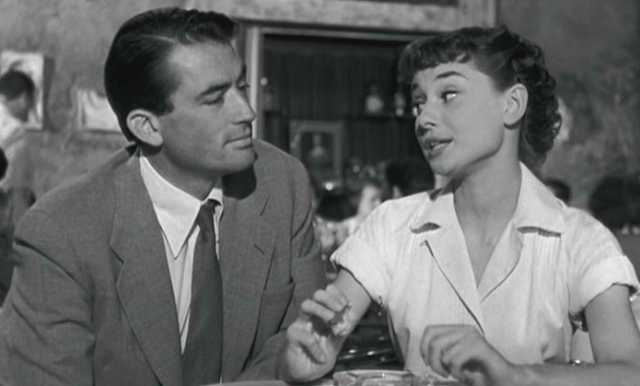 Many prospective travellers to Rome prepare for their trip by watching the wonderful Roman Holiday, starring Audrey Hepburn and Gregory Peck. The origins of Roman Holiday were far from the fairy tale scenes you see in the movie though.
In 1944, US Air Force Major William Wyler – who had just made a thrilling documentary about the famous bomber jet the Memphis Belle – was dispatched to Italy to get documentary evidence of Allied attempts to wrest control away from the Nazis of the Gustav Line south of Rome. Wyler and his team collected a huge amount of footage of the so-called Operation Strangle and ultimately followed the victorious Allies all the way to Rome in June 1944. Some of the jubilant scenes of the liberation of Rome would appear in the 1947 documentary Thunderbolt!.
By the time Thunderbolt! was released, however, appetite for propaganda war movies had well and truly been exhausted. Seeing his documentary largely ignored, Wyler then did something that was typically Roman – he recycled. Using ideas and imagery that came from discarded Thunderbolt! footage, he set about recreating an alternative vision of Rome for a new and exciting fictional film, which would eventually be released to great critical and popular acclaim in 1953.
The film, of course, was Roman Holiday.

6. The sundial of the Emperor Augustus 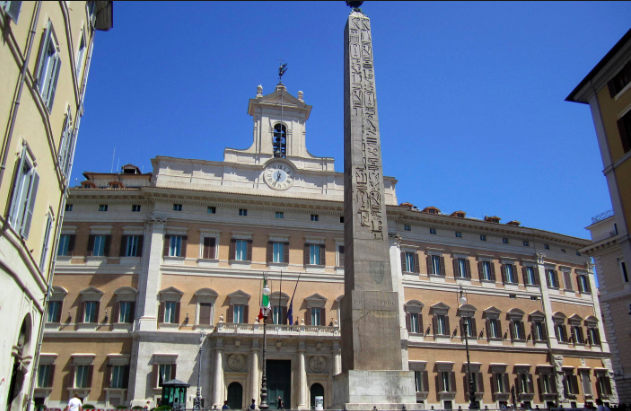 If you stroll through the Historic Centre of Rome, you’ll find Piazza Montecitorio just a few blocks from the Pantheon. The piazza is synonymous with the 17th century palace that now houses the Italian parliament; but, directly in front of the parliament you’ll see a huge Egyptian obelisk, one of 13 still in Rome.
Dating from the 6th century BC, the obelisk was one of the very first brought back to Rome by the Emperor Augustus, though it was originally placed further down the ancient Campus Martius. It acted as the gnomon (shadow caster) for a huge sundial known as the Solarium Augusti, casting a shadow directly through Augustus’s Ara Pacis (Altar of Peace) each year on September 23rd – the birthday of the emperor himself! In effect, the sun aligned with Augustus’s altar bringing peace to the world on the day he was born.
Incredibly, in recent decades, archaeologists have actually discovered markings from the Solarium Augusti below street level; the Ara Pacis, for its part, was moved during the Fascist period to its present location between Augustus’s mausoleum and the banks of the river Tiber. 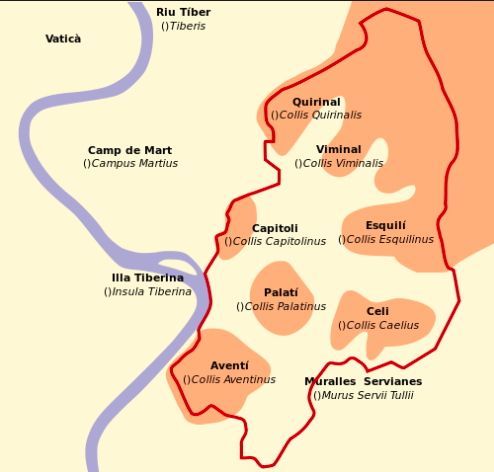 While it is sort of true that Rome was built on seven hills, it’s not the whole story. Many of the hills had more than one peak, and classification into seven hills was roughly made to suit the early seven districts of ancient Rome. Hills such as the Pincio (stretching from the top of the Spanish Steps to the Villa Borghese) were not included in the classification even though they were within in the city walls by Imperial times.
Likewise, while Rome is said to have been founded in 753 B.C. and originally had seven kings, archaeology has proven the existence of much more ancient settlements in the area. It’s hard to know whether any kings ruled before Romulus, as written accounts of Rome’s founding and subsequent development come from much later writers (such as Livy) who were as much storytellers as they were historians – precise dates and details were not always forthcoming, and thus a creative spin was often put on historical events.
As for the seven pilgrimage churches, John Paul II threw a spanner in the works by replacing the traditional St. Sebastian outside the Walls with the Sanctuary of Divine Love for the Holy Year of 2000. With many pilgrims still preferring to visit St. Sebastian (included in the itinerary for the Jubilee Year of 2016), the pilgrimage churches of Rome could now almost be said to be eight – or seven with an alternative choice for the seventh!
Written by: Shane Harnett
If you liked this article, read also “THE FASCINATING POPE WHO WROTE LETTERS TO PINOCCHIO AND DICKENS“ 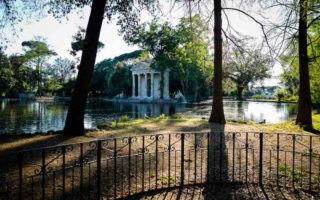 THE BEST LAKES TO VISIT NEAR ROME